THE GLYCEMIC LOAD (GL) measures the impact of a particular carbohydrate food or meal on a person's blood glucose and insulin levels. The higher the GL, the greater the increase in blood glucose and corresponding insulin response. The GL is a comparative measure, meaning that the effects are measured relative to a reference food, which is typically either glucose or white bread.

The 2000KCAL Glycemic Load Calculator and the 2000KCAL web app use glucose as the reference food for calculating the GL. One unit of GL is approximately equal to the effect of consuming one gram of glucose (1 GL = 1 g glucose).

The Glycemic Load (GL) is calculated using a measure called the Glycemic Index (GI). The difference between the GL and the GI is that the GL takes into account the practical effects of consuming a particular food or meal, while the GI is a more theoretical measure.

A low glycemic diet, or a diet with a low GL, has been shown to promote human health by reducing the risk of diabetes (insulin resistance) and promoting a healthy body composition. It is recommended to keep the GL of individual meals below 25, and ideally below 20 GL units, and to maintain a total daily GL below 100. This website recommends following a low glycemic diet to support a healthy lifestyle. 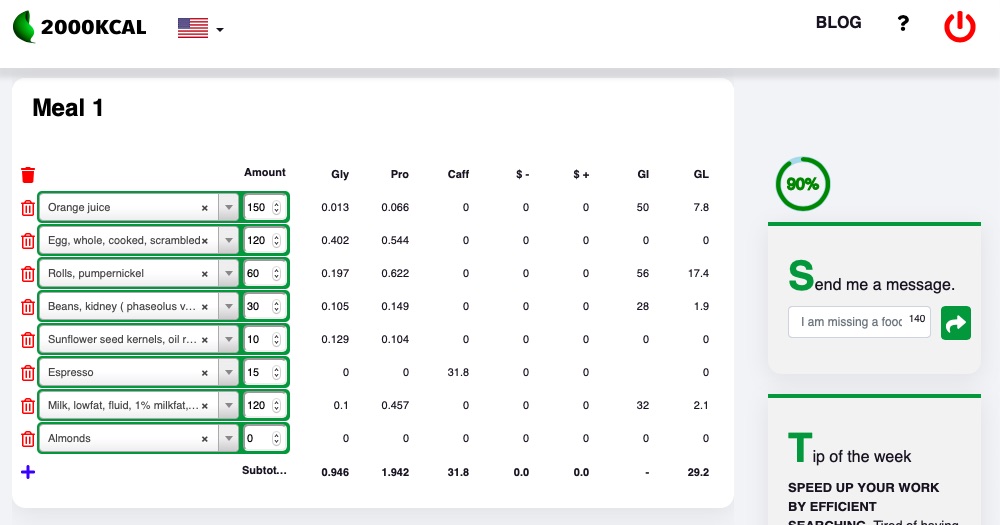 The Glycemic Index. The GI ranks foods according to how their carbohydrates affect blood glucose and insulin levels. Foods with a low GI (55 or lower) have carbohydrates that are slowly digested, absorbed, and metabolized, resulting in a slower and lower rise in blood glucose and insulin. Foods with a high GI have the opposite effect. The GI is more of a theoretical concept because it assigns a value from 0 to 100 to individual foods based on the type of carbohydrates they contain, but does not take into account the amount of those carbs. As a result, two foods can have the same GI value, but have very different impacts on blood glucose when consumed by humans.

The Glycemic Load. The GL is a practical, dynamic measure that uses the Glycemic Index (GI) value as one factor and the total carbohydrate content of a food as another. By combining these two indicators, the GL provides a more accurate representation of the impact of the food (or meal) on blood glucose.

One way to remember the difference between the GI and the GL is to think of the GI as a scale of units of measurement such as an inch, foot, yard, or mile. We know that a yard is longer than a foot but shorter than a mile, but this information alone serves very little purpose. It is only when we apply the units to real objects that the whole concept becomes useful. Similarly, the GI is a static ranking system for foods based on their carbohydrate nature, which does not provide practical information about the actual impact of those foods on blood glucose levels when consumed by a human. The GL, on the other hand, combines the GI and the carbohydrate content to give a practical picture of the food's effect on blood glucose.

The GL of a food can be calculated using the following formula: GL = GI x grams of consumed carbs / 100 The Glycemic Load of a compound food or an entire meal is the sum total of individual foods' GLs.

NOTE: Only certain carbohydrate foods are included in the Glycemic Load Calculator database. If you need to work with more foods (there are thousands of them in our database) you need to register at 2000KCAL

5. Final Thoughts on the Glycemic Load and Glycemic Index

The Glycemic Load (GL) is a way of measuring the impact of foods containing carbohydrates on blood glucose and insulin levels of humans. There is ample scientific as well as self-reported evidence to corroborate the utility of the GL, and the author of this article, skeptical as he may be about the many faux dietary concepts in existence, believes that this is for a good reason. On the other hand, it is important to note that the GL is not an exact measure. The actual impact of a food on a person's blood glucose and insulin levels can be affected by variations in how different people react to the same food, how an individual reacts to the same food over time, and by variations in the carbohydrate content of the same kind of food. Additionally, the GI (and therefore the GL) of a food can fluctuate based on how the food is prepared. Despite these limitations, the GL Calculators on this website can provide a reliable indication of whether a diet is low-glycemic or not.

Please register to use the 2000KCAL nutritional tool and learn more about the Glycemic Load (GL).

If you liked this article, you may also like: